Yesterday afternoon we took an hour out of a hectic week of pre-season testing to attend a Diversity in Tech seminar. The event was organised by the McLaren Driven Women group and hosted at the Thought Leadership Centre on campus and took the form of a panel discussion, featuring entrepreneur Emma Sinclair MBE; Leigh-Ann Russel, BP’s VP Head of Global Wells; and Zoe Jervier, Head of Talent at Entrepreneur First. It was moderated by Huffington Post UK’s Womens section editor, Brogan Driscoll, rounding off an excellent panel of speakers. 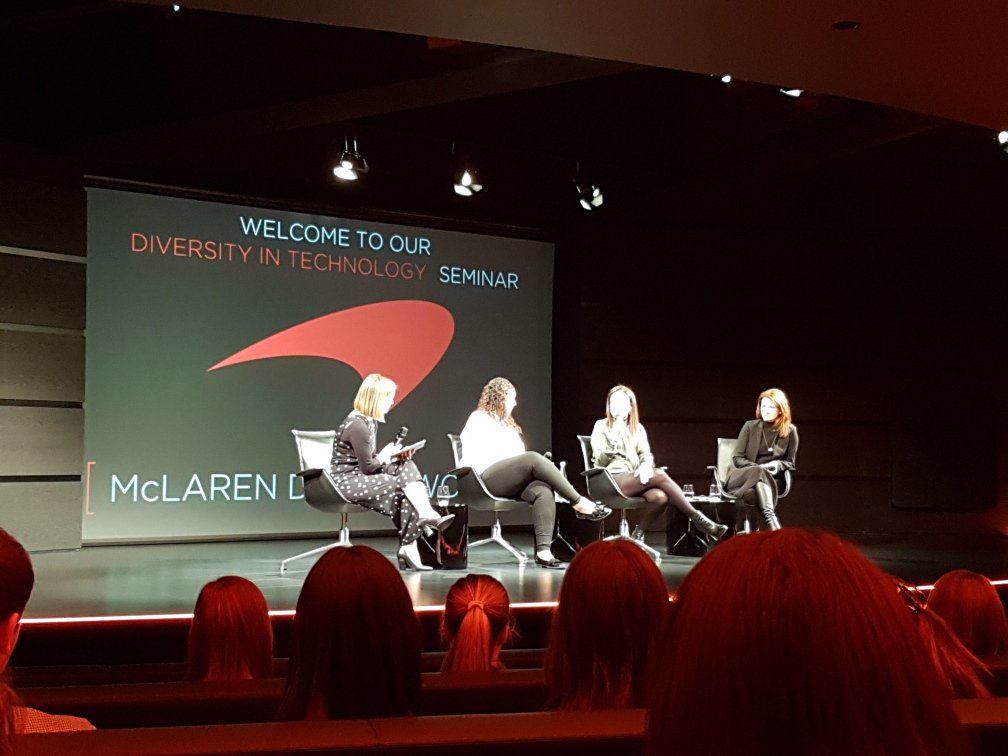 The event was hugely engaging and was well rewarded with I would estimate over 100 attendees from across the Group at the session - and a good number of men as well!

I think we all know of the problems of diversity in engineering and tech at the moment, especially on the software side of things with what’s been going on at Uber, and so many other examples. Personally this is a particularly difficult to witness scenario, especially given that I am exactly the demographic (“28-year-old white guy”) called out on stage as typical of the industry! But there is lots we can do to help, and make everybody more successful by working in diverse teams.

While the hour-long panel was wide-ranging in its topics, here are some things that stuck out for me.

One issue I have struggled with for a while is that you can’t hire a more diverse team if you only get “28-year-old white guys” applying for your jobs. Turns out someone is already looking into this and has built a “Gender decoder” for job ads.

The root cause of this problem is an unconscious bias: you don’t deliberately write job postings that target a specific gender, but do so inadventently through your use of language. More on that in a moment.

But you can go online to a gender decoder for job ads which uses a pre-defined list of masculine and feminine words to work out whether your job posting is biased one way or the other, even if it never mentions “he” or “she”. I put a recent job posting through and was quite surprised by just how biased it was, even though upon initial casual inspection it didn’t appear to be overtly biased. (Perhaps this is because it was not biased against my demographic? Another example of unconscious bias!)

I think this would be a useful tool to run on any job ad to help ensure you get a much more diverse pool of applicants for an engineering position.

As noted, unconscious bias can tend to reducing the diversity of your available talent pool. These biases manifest themselvves and are amplified in different ways.

One thing that has always annoyed me is e-mails to engineering groups starting with the greeting “Gents”. While yes, perhaps your email group may be all male, how would you feel if you were forwarded an e-mail that started “Ladies”? Maybe not the first time - but what if it happened every day for months?

I think this is an example of an amplification of unconscious bias and when I realised I first sent an e-mail starting with “Gents”, I have subsequently carefully reviewed e-mail for this before they are sent.

There was an interesting sidebar throughout the panel referring to entrepreneurship and small businesses. Emma Sinclair said, “Startups are thinking about survival, not prayer rooms” - Zoe Jervier’s advice on this was to ensure the culture of the company is oriented to be able to include these considerations later on, when it can be afforded financially - something that doesn’t appear to have happened at Uber.

Companies such as Google provide internat training for employees on identifying and eliminating unconscious bias, which sounds like a good way of getting that message out.

The panel discussed how women are put off from or not considered for top jobs because they leave at what I would deem a reasonable time in the evening in order to spend time with their family.

Leigh-Ann spoke up with a great quote on this topic - “If you’re a top performer, then no-one will question when you leave”. I’m thinking of having that framed.

The tech industry seems obsessed with people working crazy hours and I have always found this massively frustrating. I know I work my best when I work sensible hours, turn up to work well rested and releaxed, and get time to do some real hard thinking to solve tricky problems.

I can tell you this with conviction, based upon extensive personal experience - sure I can do 14+ hour days for weeks at a time, but I will get more done and it will be higher quality (plus I will be happier!) if you let me go home at a sensible hour, spend time with the family and dog, and come back the next morning having slept well after a nice dinner I had time to prepare myself.

For more than 18 months now I have been tracking my work tasks using a timer; over the past year I have been consciously trying to reduce that timer count from 8.5+ hours/day to 7.5 to 8 hours. Half of this was easy by just taking a full lunch break, a great rest-stop during the day to allow the old brain cells to recharge. Whether people say I’m a high performer or not is not for me to say but nobody has complained yet, and I personally feel and feedback has indicated my performance has improved as a result.

If only people across the industry were to realise this!

We have two excellent programmes that McLaren run, one to train mentors, and another to go into schools and show them how awesome STEM subjects are by telling them what we get up to at work.

From the panel, it sounds like the earlier you start doing this, the more likely it is to succeed - BP start doing STEM activities with kids from the age of 7. There has also been a lot of very positive feedback on the mentoring side being able to help and encourage people who might not do so stereotypically to take up engineering or technology careers.

Without a doubt there is a lot of work still to do, but it’s good to see where we can go next, and we are beginning to head in the right direction.