You may have seen some of the furore on last Saturday night following the somewhat rude interruption of an animated Graham Norton during the plot climax of Doctor Who. Thousands moaned on Twitter and wrote to the BBC regarding the matter. 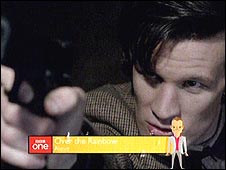 The BBC covered the complaints in two articles, including one with the video of the offending trail (which was not on the BBC HD or iPlayer versions).

I complained to the BBC, and received the following response recently:

Thank you for your e-mail.

The ‘Over the Rainbow’ trail in ‘Doctor Who’ should not have played out on Saturday and we apologise to all ‘Doctor Who’ fans whose enjoyment of the show was disrupted. We recognise the strength of feeling that has been expressed and are taking steps to ensure that this mistake will not happen again.

Thank you again for taking the time to contact us with your concerns.

Glad to see them apologise, let’s hope they don’t do it again!