But first, a little history.

Until a few days ago, I had had a Nokia E61i, my then favourite phone of all time. Full QUERTY keyboard, S60 OS power, good 3G and E-mail, but most of all my loyal companion for many years.

For a short while (while that was out of commission) I had had an original iPhone; I found that a rather painful device, as my numerous posts on the subject gently hint at.

And last Thursday we embarked on the next phase - a Nexus One appeared on my desk (#2613).

Here’s my thoughts on the phone, having had it in my hands for a few short days.

Essentially, it boils down to this: WOW. Google and HTC have put together a sensational piece of hardware running a brilliant operating system.

HTC have done a brilliant job. Super-clear and bright touchscreen, GPS, Wifi, some ridiculously fast 3G, a 1GHz processor, a compass, a huuuuuge battery and a slender design all combine to make a stunning piece of kit.

Half a gig each of RAM and ROM make the piece complete, with a Micro SD HC slot to give you space to put photos, video and music on.

I’ve tweeted solely about this and I will say it again, the AMOLED display is completely and absolutely stunning. The colours are gorgeous, its insanely bright, and its huge 480x800 resolution makes even the smallest text crystal clear. 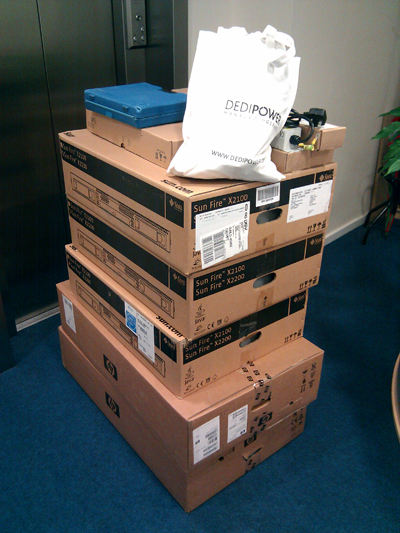 I did notice a few JPEG artifacts when I got up close and personal in Photoshop - but nothing that you would be able to visibly see when you were printing or viewing on a screen.

Phone calls are clear, and the noise cancelling microphone is brilliant - I was walking along London Road in rush hour the other night and the person I was calling asked if I was at home - it takes out so much noise.

All in all, this is a truly spectacular package that makes using the operating system a joy and a breeze.

The phone is currently rocking Android 2.1 u1, which was received as an over-the-air update within a few minutes of me putting a sim card in.

This OS is unlike anything I’ve ever used. I thought I liked S60, but this is really on another level.

Benefiting from the 1GHz processor, the entire OS is snappy, super-responsive and generally a pleasure to use. Unlike the iPhone, which takes literally ages to load settings screens and resorts to flashy animations to hide how long it takes to open and close apps, this is quick everywhere.

There are a few major areas that I completely adore. Here’s a quick run-down.

There is a unified notification center built into the OS, which appears in the top grey bar throughout the phone. Simply drag the bar down to see notifications from literally anywhere. Be this from Seesmic with a new DM, Facebook with a new message, a new SMS, a missed call - quite literally anything can pop something in there. On busy days, this is a lifesaver for tracking what needs your attention.

Of course, applications can run in the background. This is great for getting pushed notification, or other services that need polling. Bit of a battery hog but really useful for keeping informed on the go. If you’re busy and need to know about certain events as they happen, then it is a great way of keeping on top of everything.

On top of this, the Gmail integration is truly stunning, and having multiple Gmail accounts pushed to your phone is invaluable; I won’t touch another device that doesn’t do it.

The Android photo gallery really is something else. It showcases the photos you have taken on the camera and synced from your PC (it doesn’t come with software by the way - everything syncs over the web or the SD card appears as an external drive) in a beautiful way and makes it a pleasure to navigate around and view them.

The entire home screen is customisable. While based on a grid, it allows you to drop icons wherever you like.

It also features a widget-based system which any application can plug in to. For example, you can have a Music widget with Now Playing on it; a calendar with upcoming appointments; and I have a task list displayed from an application called Astrid (which also comes highly recommended).

There’s also a cool Settings widget, where you can one-click change the screen brightness setting, Bluetooth, WiFi, GPS and sync settings to quickly disable them or save power.

This is a clear example of what happens when Google put some nerds in the dev team for Android. In the About Phone section of Settings, there is a screen which displays what percentage of your used battery was used by which application since your last charge (or if you are charging, for the last time period you were not charging).

It’s just a little something that makes geeks like me smile and could be useful for debugging if you’re working on applications and wondering where your battery life is going.

Just in case you couldn’t tell already, I am completely taken aback by this phone. It is such a huge advancement from quite literally anything I have ever held or used, and I can see it being a massive benefit to me when I’m on the go for many years to come.